​Wealthy Ever After – Financial Education for South African Couples 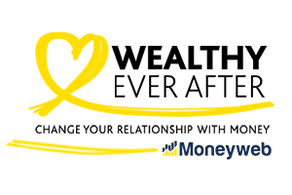 Aside from the effect it has on their finances, being in financial trouble also affects other areas of people’s lives. For example, it can lead to feelings of worthlessness, depression, cause a lack of motivation and productivity at work, and place strain on a marriage (or other committed, long-term relationship).

Are you and your partner looking for a way to improve your financial situation?

Wealthy Ever After™ is a financial education program that has been specifically designed for couples. Your wealth or lack thereof affects your partner as much as it does you. Most couples get into debt together, so it makes sense for them to learn together and then work as a team to improve their financial situation.
This five week online training course is presented by Gary Kayle, Money Coach™ and founder of The Money School, a financial education organisation that is widely respected and endorsed by Moneyweb, South Africa’s leading source of investment information.
During the course, Gary teaches couples how to change their financial situation for the better. He also explains the process that he, and his wife Debbie, followed to get out of debt and start building their life of Wealthy Ever After together.
​

(There are a few free videos on the site to give you a taste of what is taught in the full course).
​
More about The Money School:
Read this interesting Moneyweb article about the Wealthy Ever After Program The financial aspect of a marriage can often be complicated and, if not managed in the right way, can lead to a build up in debt and a consequential breakdown in the relationship. The statistics are there to back it up: 55% of divorces in South Africa are a result of financial pressure.

“In order to get out of debt you need to equip yourself with the right financial knowledge,” explains money coach Gary Kayle of financial education institution The Money School, which models its coaching on what wealthy couples do and don’t do.

Moneyweb, in a joint venture with The Money School, is presenting a series of short videos that run through the mistakes couples make when putting their finances together, what they should focus on and what to avoid.

Primarily aimed at equipping South Africans with financial knowledge, the Wealthy Ever After series hopes to educate couples on what they need to know and how it falls into the greater scheme of things.

After running financial education workshops at top blue-chip companies for more than 15 years, Kayle explains that the couples approach was born out of a simple request for spouses of attendees to be there too.

Now, the focus is to get couples talking abour their finances…”without starting a war,” he quips.

“The difference between the wealthy and non-wealthy is that they have an understanding of their finances,” Kayle says.

In the opening video of the Wealthy Ever After series, Kayle covers the biggest mistake couples make in their financial relationship, why they find it difficult to manage money and the key five areas that millionaire couples focus on.

“If you have an overdraft facility, credit card, car payment, mortgage facility and you feel like things are going badly – and you don’t know how to get yourself out of that situation – then you’re a normal couple,” he explains. The average household debt to income ratio in SA is 76%.

Unfortunately, couples only talk about money when there is none. “Don’t take a lucky-packet approach to your finances. You need a game plan,” says Kayle.

“We believe in hard work, there’s no get-rich-quick scheme, but your financial life should be geared towards spending more time with your family, more holidays, and getting out of debt… if it’s not – then you need to watch this video. It explains things that you need to know with regards to your finances and relationship, that you didn’t know were important.”